“What? School just started back!”  No, that’s not what I’m talking about.  When was the last time we really pushed the envelope with ourselves to see what we have in us?  When watching television, I sometimes come across shows where people are doing what seems to be the impossible; people who love the adrenaline of seeing just how far they can go with a particular feat.  Some of the things I see just make me want to shake my head, and yet, others are actual, honest assessments of endurance; to see if they have what it takes to make it all the way, or to break some sort of record.  It’s a testing of one’s strength and stamina.

Tests, for most people, are not pleasant at all.  It doesn’t matter if its elementary age level test all the way through college, or a learner’s permit; tests make individuals uncomfortable because they are designed to see what one has in them.  If speaking in terms of education, it is probing one’s intellect to see if enough knowledge has been retained and also able to be applied.  If speaking in terms of physical endurance, it is working out in the body to see if one is deficient in a particular area, to point out any weaknesses that need to be strengthened for one to gain a particular goal.

This is why tests are not pleasant.  Because, it goes beyond the façade on the outside to see what one really has in them.  No truer is this more prevalent then in our spiritual lives.  The stuff on the inside is quickly hidden as we enter the church doors on a Sunday morning.  No one else can see the battles or struggles going on inside.  That is, no one else, but God.  “For the LORD seeth not as man seeth; for man looketh on the outward appearance, but the LORD looketh on the heart, (1 Samuel 16:7).  And, it is the test of the heart that really matters; the places where others can’t see.

I live around the corner from a prominent cemetery in our area.  It serves the needs of all people, but they specialize in handling the burials of fire fighters and police officers.  It is not unusual to see a processional of cars go by on any given day to lay a loved one to rest.  Sometimes the line is long and sometimes it is short.  If it is one of those specialized burials, then the whole affair is catered to honor the life of the one who has served.  There are what seems like hundreds of police cars from all over, horses, raised flags, gun salutes, honor guards and the like.  It becomes a beautiful send off in the midst of sorrow.

No matter who it is I often wonder about the individual being laid to rest.  It becomes a stark reminder for me to follow the prudent advice of Paul and examine myself.  We all have areas that need improvement; things that we can do better.  Sometimes a close, personal examination is the only thing that will draw it out of us, to see “whether ye be in the faith.”  Are we where we need to be when our time comes to be at the head of that processional?  I pray that we all are.

“Now therefore, give me this mountain of which the Lord spoke in that day; for you heard in that day how the Anakim were there, and that the cities were great and fortified.  It may be that the Lord will be with me, and I shall be able to drive them out as the Lord said,” Joshua 14:12

At the age of 85, Caleb was more than ready to take what the Lord had promised to him.  You see, when Joshua and Caleb were sent as spies into the land of Canaan there was a promise left for their belief in God.  “Surely the land where your foot has trodden shall be your inheritance and your children’s forever, because you have wholly followed the Lord my God,” Joshua 14:9.  As of yet, Caleb had not gotten his promise.  But, now he was ready to take what the Lord had promised.

Only there was this one thing, the Anakim were there.  The Anakim were giants, nonetheless their stature brought no fear in the heart of Caleb.  He was ready to “drive them out,” (Joshua 14:12).  In fact, when the rest of Israel was ready to run scared when God first brought them to the Promised Land, he and Joshua was ready then to take care of business.  Years later, this aged gentleman, as some would consider him, was still just as ready to take what God had promised to him.

A lot of times God gives us promises but in our eyes it may look insurmountable.  Obstacles are in the midst of the promise that makes it appear as though one can never possess it.  I like that Caleb was 85 years old.  I like that it was over 40 years before he had the opportunity to go for his promise.  I like that there were giants in the land that made it look impossible.  I like these three points because they are some of the most popular reasons people give up on waiting for the promises of God.

1.  Caleb was 85 years old, this implies limitations.  Instead of looking to God   for their source too many people focus on their own limitations, their own inabilities to get the job done.  Not Caleb!  He didn’t care about his age, God promised it and he was ready for it.  It is as the British Evangelist John Flavel stated, “Man’s extremity is God’s opportunity.”  The Bible says that God is “able to do exceeding abundantly above all that we ask or think,” (Ephesians 3:20.  Take the limits off of yourself, and more importantly, take the limits off of God.

2.  Over 40 years implies waiting.  This is something that is very hard for most people.  Many times over in the Bible people waited quite a bit of time before they laid hold of what God said He would do in their lives.  If God said it then He will do it, but our job is to wait.  Here are some encouraging reminders about waiting on God:

3.  There being giants in the land implies obstacles.  Many people look at their dreams, their hopes and the promises of God and can believe them for everyone else except themselves.  To them, it looks as if they can never possess it.  This is a hopelessness that God does not desire to see in His people.  The Bible says, “The just shall live by faith.”  This is a key verse in Scripture and God  made sure it was put in there four times (Hab. 2:4; Rom. 1:17; Gal. 3:11 and Heb. 10:38).  We are to have more faith in the God we serve as Caleb did when he said, “It may be that the Lord will be with me,” (Joshua 14:12), then in the obstacles before us.

Don’t be afraid to take your mountain today!  Don’t be afraid to go after what God has already promised you.  Don’t look at your limitations, the waiting or the obstacles.  God can and will overcome it all to fulfill what He promised to you!  God bless.

Copyright © Word For Life Says.com (Sharing any posts or lessons can only be done through the share buttons provided on this site from the original posts, lessons, and articles only. You can reblog from the original posts only using the reblog button provided, or share using the share buttons provided from these social media platforms: Facebook, Twitter, or Pinterest, etc., and they must be shared from the original posts only. All other repostings are prohibited. Posts and other items of interest found on this site MAY NOT BE COPIED AND PASTED, downloaded, uploaded, etc to another website or entity not listed (physical or electronic).  See COPYRIGHT PAGE for more details. 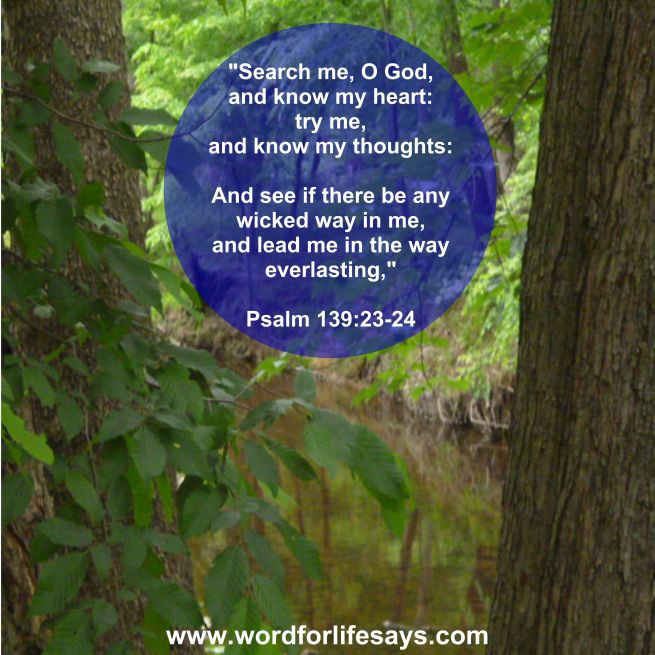 From the inside out

And see what my life

Am I living true to Your holy name,

Or is my worship just a game?

And know my heart

And see from Your way

Have I thus part.

In my spirit, I am most sincere,

Please search, and to Your side

And tell if You see

Anything that will keep me

If it be there help me dig out the root

Save me from my sometimes

With a heart in deep sorrow,

Pleading for You to lead me

To Your heavenly tomorrow.

And lead me home

To the place where I stand

Before Your righteous throne.

Living in the peace You gave to me,

For Your search dug out who I used to be.